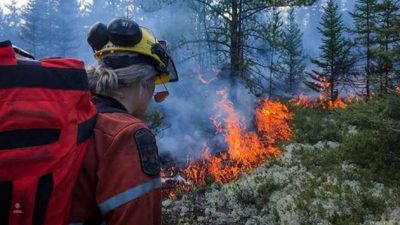 A special air quality statement has been issued for the northern Ontario cities of Sudbury and North Bay – due to smoke from forest fires in the area.

Environment Canada says smoke is causing poor air quality and is reducing visibility – and the agency warns that conditions may deteriorate – if the smoke descends to ground level.

The main source of the smoke is a fire known as Parry Sound 33 –  that has forced evacuations in parts of the municipality of Killarney – and prompted an evacuation alert in part of French River.

Parry Sound 33, which has burned through more than 100 square kilometres of forest – started on July 18th and is only five kilometres from the Trans-Canada Highway.

Ministry of Natural Resources spokesman Shayne McCool says the fire has not expanded since Tuesday – but the area hasn’t received some hoped-for rain that would have helped crews battle the huge blaze.