TRUDEAU TO SPEAK ABOUT FORD'S USE OF NOTWITHSTANDING CLAUSE: JOHN TORY

Toronto’s mayor is indicating that Prime Minister Justin Trudeau will speak out against Premier Doug Ford’s move to invoke the notwithstanding clause to reduce the size of Toronto City Council from 47 to 25 wards. 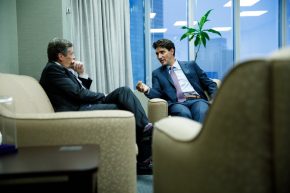 “He will speak for himself when he says something about this in terms of the use of the notwithstanding clause because I think for people in Toronto and Canada and for cities who have been trying to carve out a role that is commensurate with the fact eighty percent of Canadians live in cities, this is a very disconcerting move in the sort of longer term besides the issue of Toronto City Council,” Tory explained on Tuesday morning.

But what about asking the prime minister if anything can be done to fight back against Ford’s plans to push through Bill 5?

“I didn’t really make that sort of request because we talked about the fact that the notwithstanding clause is worded quite deliberately by those who framed it, in quite a way that leaves very little room for anybody to do very much about it,” Tory answered.

Mayor Tory is holding an emergency meeting of council on Thursday, a day after Premier Ford recalls the legislature to push through the Bill, which an Ontario Superior Court judge has ruled unconstitutional.

“I was elected. The judge was appointed by one person, (former premier) Dalton McGuinty. I was elected by 2.3 million people,” Ford punctuated during his Monday afternoon news conference.

This will be the first time the notwithstanding clause is being invoked in Ontario. Once the legislation is passed, it would be protected from a charter challenge for five years.