If you’ve been driving the Don Valley Parkway since Tuesday, then you’ve experienced the congestion both north and southbound between Don Mills and Lawrence because of simultaneous reconstruction on four bridges.

But despite assurances that the work would be done around the clock, that does not appear to be the case.

Mayor John Tory witnessed this himself as he was driving the DVP on Tuesday, and then commented on it yesterday, saying he will be asking what’s going on. 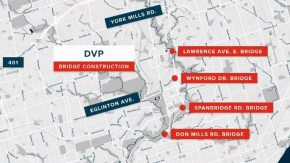 Work on bridges over the DVP at Don Mills, Spanbridge Road, Wynford Drive and Lawrence Avenue East is to continue until October.

Through mid-August, the median lanes on the north and southbound DVP will be closed between Don Mills and Lawrence, squeezing traffic to two lanes each way.