The 14 year old boy at the centre of an Amber Alert has been found safe and is back with his family. 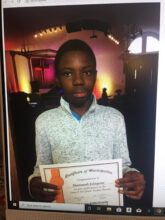 Investigators say Shammah Jolayemi was discovered in a vacant barn in Brampton Thursday night and was then taken to hospital for a medical check up.

Toronto Police believe the child was abducted by two men at about 8:30 in the Jane and Driftwood area on Wednesday morning. They also believe his abduction is directly connected to an unpaid drug debt related to a 4-million dollar cocaine heist in the Summer of 2019 by Shammah’s step brother.

More details are expected to be released at a Friday morning news conference.

Meantime, four teachers at Shammah’s school have been put on home assignment as a result of an apparent breach in policy.

TDSB spokesperson Ryan Bird says Shammah’s parents should have been told about their son’s absence in an 11am Wednesday phone call.

He says instead, the call was made just after 6pm on Wednesday. Bird says a full investigation is being conducted.