TEAM CANADA WON'T ATTEND IF THE TOKYO OLYMPICS GO AHEAD IN 2020, CALLS ON IOC TO PUT OFF SUMMER GAMES TO 2021

Canada won’t have a team at the Tokyo Olympics unless the summer games are postponed by a year. 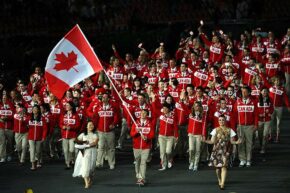 In the midst of the COVID-19 pandemic, members of the Canadian Olympic Committee and Paralymic Committee have issued joint statements saying they refuse to send their teams to Tokyo unless their respective games are pushed back a year.

The statement reads, “while we recognize the inherent complexities around a postponement, nothing is more important than the health and safety of our athletes and the world community.”

It goes on to say, “this is not solely about athlete health, it is about public health.”

Toronto Mayor John Tory is weighing in on the decision, which he says is the right one.

“In the great scheme of things, if the Olympics are held a year later, we’ll all take the same joy, in fact much more joy,” Tory explained to CP24, “And on the practical side if you think about it, if this thing gets over in a couple of months, and that’s optimistic, then it takes time for the airlines and everybody else to get organized again and to put on something like the Olympics, I think Canada is thinking very practically about that and saying let’s put that off or at least ask to put it off, and I hope the IOC is listening.”

Mayor Tory is in self-isolation until Wednesday, after a trip to the United Kingdom two weeks ago. He joins Zoomer Radio’s Fight Back with Libby Znaimer at about 12:30 on Monday.

Members of the International Olympic Committee say they are now considering a postponement.

IOC President Thomas Bach has sent a letter to athletes explaining a final decision is likely to come in four weeks.