The 52nd annual Caribbean Carnival features the grand parade (as always!) which takes place Saturday from 8:30am to 9pm. 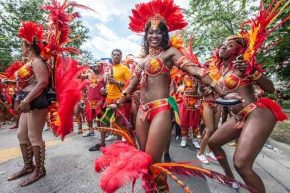 It begins at Exhibition Place and heads west on Lake Shore Boulevard West.

Toronto Police say there will be a number of road closures and restrictions in the Lake Shore area around the exhibition grounds, so it’s advised you take transit to take in the festivities, or to get around them.

Road Closures around the Exhibition Place Grounds and Lake Shore Boulevard West will take effect on Saturday August 3rd at 2 a.m. and will remain in effect until Sunday August 4th at approximately 6 a.m.

“Drivers who choose to stop or drive in a manner that puts other road users at risk will be subject to strict enforcementm,” police said.

The following streets will have restricted access for vehicles:

Police say parking restrictions will also be strictly enforced on surrounding streets in the area bounded by King Street West., east of Colborne Lodge and west of Bathurst Street.