JUSTIN TRUDEAU STAYS ON AS CANADA'S PRIME MINISTER, 13 SEATS SHY OF A MAJORITY

Justin Trudeau has won a second term as prime minister. But this time, he will lead the country in the capacity of a Liberal minority government, with 13 seats shy of what’s needed for a majority. 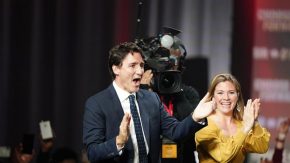 “I have heard you my friends,” Trudeau told supporters in his Montreal riding of Papineau, “you are sending our Liberal team back to work, back to Ottawa, with a clear mandate. We will make life more affordable. We will continue to fight climate change, we will get guns off our streets, and we will keep investing in Canadians.”

Trudeau’s Liberals, elected in 157 ridings, will need the support of MPs from the NDP or the Bloc Quebecois to command the confidence of the house.

But Conservative Leader Andrew Scheer, whose party boosted its seat count to 121 and won the popular vote nationwide by a slim margin, predicted the Liberal minority will be short-lived.

“Tonight, Conservatives have put Justin Trudeau on notice, and Mr. Trudeau, when your government falls, Conservatives will be ready and we will win,” Scheer declared at a party in his Regina riding.

Meantime, NDP Leader Jagmeet Singh is promising his party will play a constructive role in the new Parliament Canadians have chosen.

“And I spoke with Mr. Trudeau, the prime minister earlier tonight,” Singh explained at his party in Burnaby, B.C., “and I let him know that we’ll be working hard on making sure we deliver the priorities that Canadians have, that all of you have.”

Singh’s priorities are national pharmacare, national dental care, and action on climate change. But Singh has signaled the NDP will fight plans to expand the Trans Mountain pipeline’s capacity to carry Alberta oilsands crude to the B-C coast.

New Democrats are elected in 24 ridings, fewer than the 39 seats they had before the election and falling to fourth place in the Commons behind the Liberals, Conservatives and the Bloc Quebecois, which more than tripled its seat count to 32.

Elizabeth May and the Greens scored a third seat in Parliament, retaining their two on Vancouver Island and grabbing a surprise seat in Fredericton.

“For the record books, this is the best election result that any Green party in any first past the post system has ever had,” May told her supporters, “and we enter parliament as the first caucus in the history of our parliament, with two-thirds women!”

As for People’s Party Leader Maxime Bernier, he lost the Quebec riding of Beauce which he’d held since 2006.

U.S. President Donald Trump has tweeted out his congratulations to Justin Trudeau for his “wonderful and hard-fought” re-election last night.

Trump said Canada is well served and he looks forward to working with Trudeau toward the betterment of both countries.